Sunday again… It’s been a short week, what with the Bank Holiday, but still it feels like I could do with a bit more time off.

Yesterday I went to see the Brains: The mind as matter exhibition at the Wellcome Collection. It was quite interesting, and at some times disturbing, to see what humans have done to brains in the course of history. Special mention the video of some brain surgery, which I tried to watch twice and failed, it was a bit too much for me. The jars with brains and tumors, and the different instruments and saws for perforating the skull and cut pieces of brains.

After the exhibition, we went to the pub, of course.

What I really wanted to write about today is what I did on Bank Holiday Tuesday… I went on a walk in the countryside!

The day started by catching the 0915 train to Hastings from Charing Cross. I was on my own and a bit unsure as to what to do, where to go or even what to expect! One and a half hours later, we arrived at Crowhurst. I got off the train, and saw a group of people on the platform, all wearing walking boots, and carrying backpacks. I asked if they were doing the walk and the response I had was: “Of course, no one ever comes to Crowhurst if now for the walk.”

The group were a mix of middle aged men and women, which turned out to be quite amiable and lovely. We set off, following the instructions. It was a sunny morning, and quite warm, so I decided to take off my jacket (as I had seen it was going to rain later on, I had decided to wear my waterproof coat, which is the same I wear when snowboarding, so I was quite warm after a few minutes).

I was carrying my camera with me, but unfortunately I couldn’t take as many pictures as I would have liked to, as they were walking pretty fast.

The walk was wonderful! We walked through woods, farms, went on trails and paths, had to go through gates, over stiles… We saw horses, cows, sheep and rabbits, and even walked on a wheat field! It was quite tiring, I must admit, but worth it..

We stopped after midday at a pub, to have some lunch, and then resumed the walk. 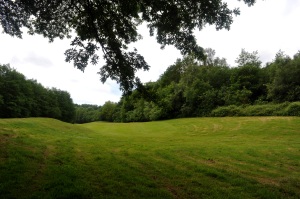 In the afternoon, the walk became a bit more difficult, as the plants were overgrown, and were covering the path in some places. There were nettles as tall as me, and the grass was as high as my waist at some points. It started raining, so after a few minutes of trying to walk through the grass, pretty much making the path again, we were completely drenched. The afternoon was quite taxing, even walking next to a water-waste plant, which wasn’t very nice because of the foul smell, and the flies and mosquitoes!

We walked for about 12 miles, from Crowhurst to Battle, following the walk described in Saturday Walkers Club (I believe this walk was from Time Out, but I’m not entirely sure).

At the end, most of the group decided to take the train, but I stayed with 2 people, having some ale at the pub.

It was a great day out, and I can’t wait to go walking again, only I hope next time I can walk at a slower pace and take the time to take a lot of photos!