This week I’m doing a bit of a mess over here…  I started writing a post, then left it unfinished, then started working on another post, which has nothing to do with the style of posts I’m doing during the week. For a while there, I was thinking whether to shake things up a bit and publish it, or stick to the plan and publish it on Sunday.

Finally, sticking to the plan won and the other post (photos!) will be published at 6pm (UK time, that is) on Sunday, in case you want to cancel your plans and, you know, keep refreshing your browser! Ha!

Instead, today I’m going to write about DIY (someone is on a roll, giving me all these ideas lately!)

I’ve always thought I wasn’t good at doing DIY or crafts. I could have an idea, but to use the glue stick and all that paper, and all that effort and small details… it was way too much effort. I’ve always wanted to do something, and after 2 seconds of starting, I already wanted it finished.

Somehow, someday, that changed. I know why it changed… It changed because of Pinterest. I think, the main problem is that before, I was trying to do what others were telling me to, but thanks to Pinterest, I had all these many suggestions, and I could choose what I really wanted to do. So much inspiration… Here’s my DIY board, of all the things I would love to make someday!

In the past couple of years, I’ve learnt how to knit, how to crochet, how to decorate, decoupage, and have had many ideas for doing stuff. Now, when I see something in a shop, my first thought is “I can make that”.

These days, people tell me that there’s nothing I cannot do. To be honest, sometimes it feels like that’s true!

Where am I going with this?

I am a bit chaotic, I am always jumping from here to there, and I normally have many ideas, things I want to do, stuff I want to write, and then I forget, or do something different. Crafts and DIY is a bit of a therapy for me.

Don’t get me wrong, there is normally a lot of swearing involved, and I get stressed, and I mess up, and I make a mess… but it calms me down. Of course, my chaos isn’t cured, and I have a few half-done projects lying around, but that’s a part of my personality that will probably never change (and I worry about the future, if I ever have kids, what will become of the poor things?)

I am also a bit like a Labrador, and I get over excited about stuff (oh, boy! Oh, boy!), so whenever I finish a project, I proudly show it to everyone, not because I want praise, but because I can’t believe that I did it myself (OK, from a selfish point of view, I also like a bit of praise and awe here and there).

What I like the most about DIY and crafts is that you can share it with others. You can give ideas to each other, and learn from other people’s projects, so it enriches you. Many times I’ve said I do this or that, only to be surprised that the other person has replied with a “me too!” and that has started a conversation of hours, talking about needle/hook sizes, paints, glues, or what-not. It’s surprising the amount of people that actually make stuff.

So, I also want to share my (little) knowledge with others. I’m always trying to recruit more crafters and show people how to do stuff. I like encouraging people to do things themselves, from cooking, to building furniture (and I’m not talking about building IKEA furniture!), just because I love the feeling you have after making something yourself so much, that I want everyone to experience.

I was very happy when my mum told me she had started knitting again, and she knitted scarves and hats!
(All the pictures below have been sent to me by my parents, I didn’t take them!)

Last Christmas, I made an Advent Calendar for my family, and my mum helped me finish it, as I was making it in Madrid, ran out of time, got annoyed, decided it wasn’t worth it, then tried again, got frustrated, then had to come back to London. 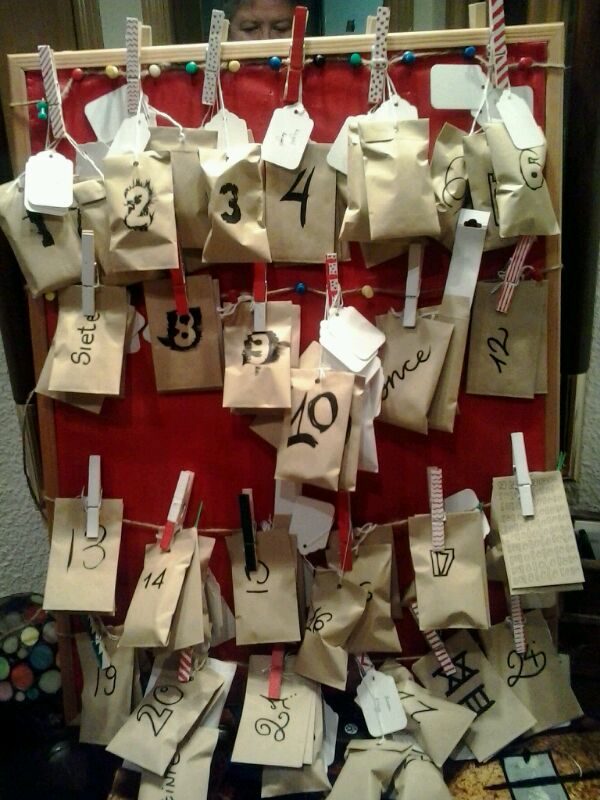 My parents have now re-vamped their vegetable garden, and my mum has even decorated a lamp recently! 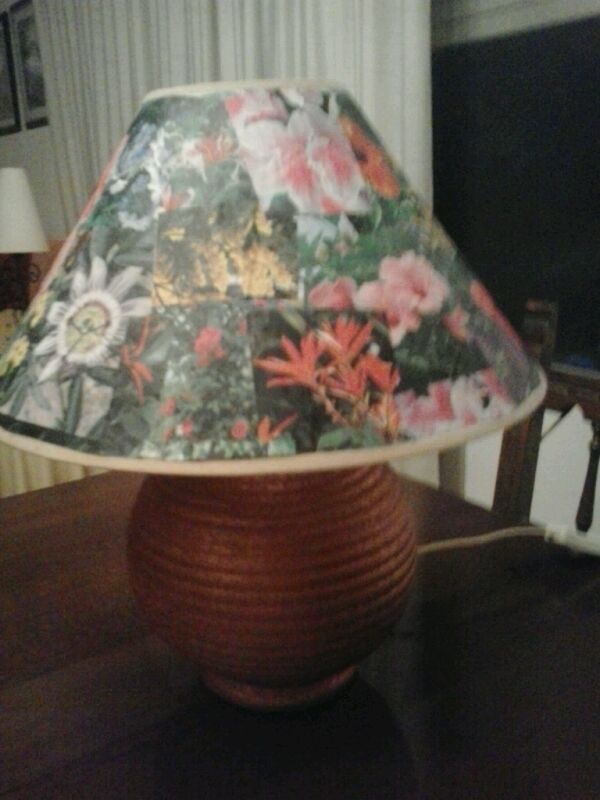 My brother is making lamps for his room, and he’s even tried knitting (and is very good at it already!)

It’s very rewarding to see people around me making things. I know a lot of creative people: photographers, musicians, crafters, cooks, painters, carpenters… Of course we all fall into the claws of this fast paced world, but it’s important that we take the time to enjoy things.

Sure, I could buy a scarf from the high street, but where would the fun be in that?

I always say that I appreciate the simple things in life… Smiles, rain, sun, grass, a silly joke… Creating something is part of that same concept. It reminds me of times past, when our grandparents didn’t have these mass produced items that were old after months from purchase. It reminds me of a time when things were fixed, not replaced.

Sure, the things I make are not perfect – they’re wonky, some are patched, others are still unfinished. I drop stitches all the time, and I still haven’t learnt how to fix my mistakes… but whenever I grab the crochet hook, or the glue gun, I feel happy. All my troubles are stored away, and I can just relax, without having to think or decide.

I will probably not change the world, but by making a present to my family and friends from time to time, I show them that they mean to me more than any amount of pounds, and that’s because I’m not only giving them a present that I just bought in a store, I’m giving them my time, my inspiration, the effort I took to think of something that this person would appreciate.

It’s interesting that many of these things, like the crocheted toys, were done for others before I even thought of making one for myself! Why? I don’t know. It might be because I think of others first, but I think it might actually be because I’m just absent minded!

Is there anything you make? What are you good at?