You have a lot of fun when you’re out and about with your friends, drinking, and the next morning, it’s like a revenge on you for having too much fun.

I had made plans with my friend Su a while back to meet on Saturday, and when the day arrived, we decided to go to this new trendy market in Lewisham, just by the shopping centre.

The place was a bit hidden, and it looks nothing like a market, and more like an abandoned warehouse. At the entrance, there were a few security guys making sure nobody was there to cause trouble.

There even was a Jared Leto lookalike! You can see him towards the right on the pic above (just by the Superstyle Hair Studio column), long hair and sunglasses… That’s totally him! Ha-ha

Inside, the place looked like Shoreditch had just came to Lewisham for a visit! You may or may not know this, but I love Shoreditch. I know it’s now trendy to hate it and to be so fed up about it (I guess it’s gone too mainstream), but I still like it. I like that bars are all eclectic and fun, everywhere looks artsy and it’s generally a cool place for me. Whether you like people going there or not, well, that’s a different story, I guess, but I try to go whenever I have a chance.

The place was relatively square, with units all around the edge and a bunch of them also in the middle. There was plenty of space to move around and even dance a bit. At the far end, a big bar dominated the view. There was food from everywhere: dumplings, tacos, hot dogs… Next time I go, I’ll make sure to try the hot dogs! 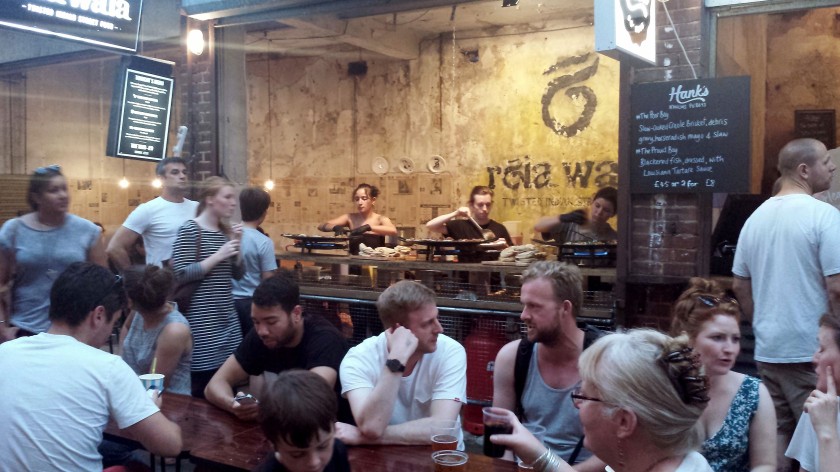 We went straight to the bar, and I ordered a beer, and stuck to that all night. Of course, the purpose of not mixing drinks was defeated by the quantity ingested…

Su and I spent most of the time being silly! When we found miniature chairs, and of course we needed to sit down and try them. They weren’t particularly comfortable, I’m afraid.

See? That’s how excited I was about going for a drink with my friend!

After a while, our friend Oummou joined us too and we stayed there until late (I got home past 1am!)

We drank, ate and roasted marshmallows (first time for me!). We talked to a lot of people, and I chatted with the bar staff (as usual, I know). I even brought some marshmallows to one of the guys who hadn’t had the chance to eat any yet. See? I’m a cool girl.

At the end of the night, I seem to recall one of the bouncers was hitting on me, a lot. Ha!

Anyway, it was a fun evening. I hope we’ll do it again soon, even if my head hurt all day… well, until I found an ibuprofen, because that’s the only thing guaranteed to ease hangover headache for me!