The thing about making plans is that they can change. I always make a lot of plans, and then I rarely stick to all of them, if any!

As you might remember, I had a lot of plans for last weekend. Well, life had a different idea of what I should do instead…

On Saturday, I woke up late, as many other Saturdays. As you know, my plan was to do some shopping to find a pair of denim (or a few!) so I was going to have my lunch and then go to the shopping centre.

My weekends are chilled. I am in no rush, I don’t care about meal times or anything like that. Usually, I revert back to my family traditions and eat at 3pm or have dinner at 10pm.

My lunch was almost cooked, but still needed a bit longer in the oven (roasted vegetables!) and I was watching some TV in the meantime, still in my PJs. Suddenly, I received a WhatsApp message from a friend and colleague.

Hi. I have 2 tickets to secret cinema playing Back to the Future. You have to be at Hackney Wick overground at 5.45. Do you want them?

Now, I’ve been wanting to go to this event for ages, but at roughly £53 per ticket, it was never going to happen. I quickly asked the relevant questions: How? (Her flatmate’s friend had bought the tickets, but he couldn’t attend so gave her and she gave them to my friend) Why? (She couldn’t go any more) Who was going? (Nobody I knew, just me and whoever I wanted to take with me) How much I needed to pay?…

As it turned out, the tickets were free if I wanted them. I said I would be more than happy to go, and embarked on the mission to find my plus one. A quick Facebook status, and a couple of WhatsApp messages, and I had my partner in crime: Oummou. Awesome. Now, I just had to make it on time. It was 3pm and I had to finish my lunch, have a shower, find an outfit, meet Oummou and then we would drive all the way to Hackney. It sounded like a mission, but like hell if I was going to miss it.

Three or four outfits later, I was ready. I didn’t look much like a 50s lady, but I was trying. I signed up on their website, and got given a new identity: Susan Johnson, Chicken Catcher, business card and all. Oh, this was fun! 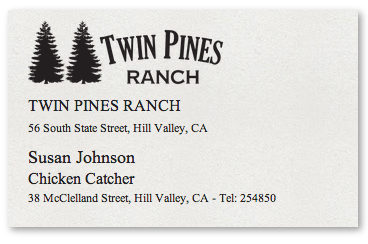 Secret Cinema, Back to the Future Business Card – www.hillvalleycalifornia.com

Oummou and I were super excited! We got on her car and started our way there. Unfortunately, there was a lot of traffic to get to Blackwell Tunnel, and we were stuck for a bit. Bored, I decided to check my phone.

Sorry, someone is taking the tickets!! I hope you’re not heading over there just now. My flatmate gave it t someone she knows.

Oh no! We were stuck in traffic already on our way, and we had got super excited about it. I checked the time, asked my fellow adventurer and driver how long it would take us (20 minutes) and proceeded to text like crazy. We were almost there, I was even dressed up, how could this happen? It all had been because of miscommunication. My friend was given the tickets to give away, but her flatmate was also trying to find someone in the meantime! I just knew I didn’t want to miss this at all, so whatever would happen, the tickets were mine. My friend and her flatmate tried to contact the other couple to no avail. I asked what the situation was and then, she texted the magic words…

My flatmate is like whoever gets there first wins. Good luck!

Oh, it was on. Suddenly, the whole dynamic of the day changed. Again.

My day had started like a normal Saturday, relaxed, a bit lazy, having some plans… Then, out of the blue it turned into a fun evening out with a friend. And just then, it had become a competition, a treasure hunt! I felt as if a camera crew were following us from that moment onwards! We were still in traffic, but had just passed the tunnel, so it would be easy from then.

We had a plan.

Oummou would drop me off at the meeting point, and I would see if I could scan the tickets while she parked. When I got there, I asked around and we actually had to walk 10-15 minutes to get to the actual entrance. Dammit!

I started walking, while checking if Oummou was behind me. She called me, she had been running to catch up and we power walked the rest of the way. I have to say, it was amazing to see everyone dressed like the 50s. All the skirts and petticoats, the braces, the Victory roll hairs, the bow ties… I loved it, and felt underdressed for the occasion. Still power walking (on heels), and running a bit out of breath, we finally reached the entrance, which looked like a barn, Two Pine Ranch, from Mr. Peabody, to be exact. We had to queue, get our bags checked, and then, we approached the guys who were scanning the tickets. This was it, the moment of truth. Had we made it before the other people? Did we win?

The moment of truth.

I had never felt so nervous before, my heart was racing. I think I even began acting dodgy, as if my tickets were fake and I was trying to sneak in. I gave the guy my phone, so he could scan the QR codes, and waited. After a second, I saw a green message flash on his screen and I let a bit of breath out. First ticket was a go. I was in. Second ticket. He placed his reader on top of my phone and nothing happened. He tried again. Nothing. I glanced at Oummou, not knowing what to do. I suggested that he zoomed in on the code a bit more, just in case. He did and scanned again. A green screen flashed again. Thankfully. We were in. We won. When I looked at Oummou, she had a smile as big as mine. I felt elated. 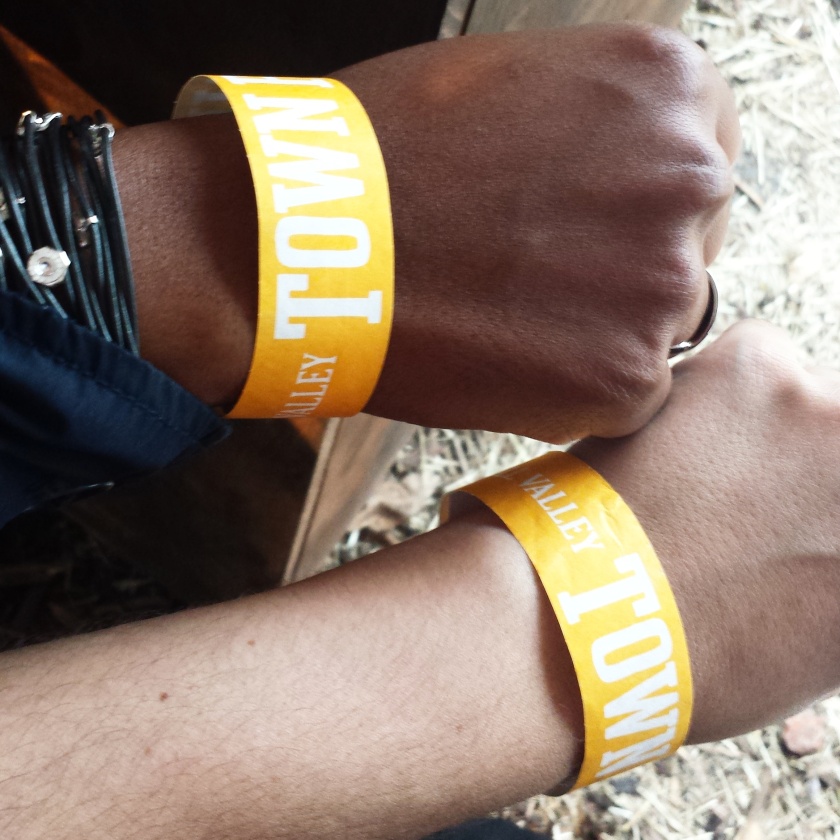 I just had time to message my friend to let her know we were in before I had to hand over my phone to be kept safely away during the whole performance (we won!). No mobile phones in the 50s! I was gutted because I would not be able to take pictures, but then learnt that there were disposable cameras on sale in the fair, which made it all even more exciting (and we won). Of course that meant that most of the pictures were going to be too dark, or too blurred, or who knows! Taking a photo and not being able to check it? What? They gave us very high ISO film, though, because the photos are super grainy! I guess this is me, apologising for the quality of what’s coming below… Sorry!

We walked through the ranch, and saw sheep. As we kept walking around (seriously, the heels might not have been such a great idea), we were taking in the atmosphere. We turned a corner, and we were in the 50s. There were some houses scattered around which you could visit and see how they would normally look inside. 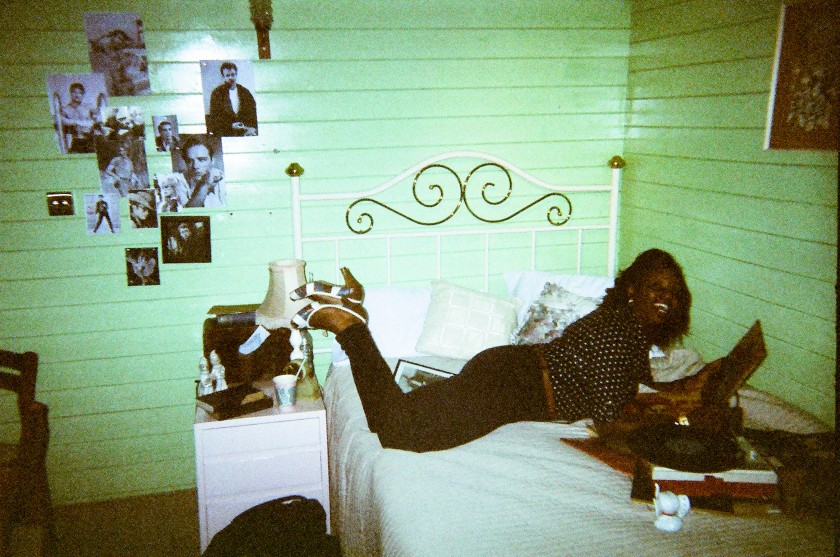 People were skipping rope. You could see the jocks with their red jackets, the nerds carrying huge piles of books. There were some pretty ladies with beautiful dresses and skirts walking around. A bit further, there was the gas station, Hal’s Bike Shop, Lou’s Diner, and pretty much everything from Hill Valley, but the most striking of it all was the clock. The clock! 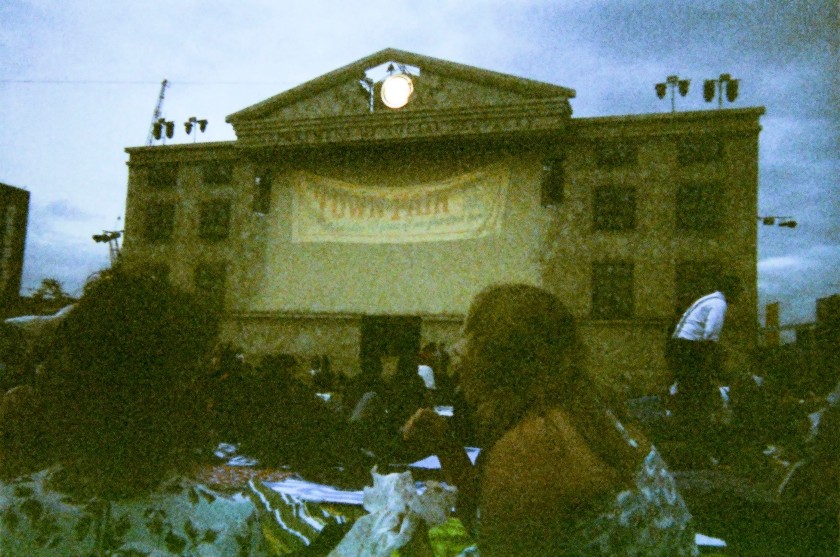 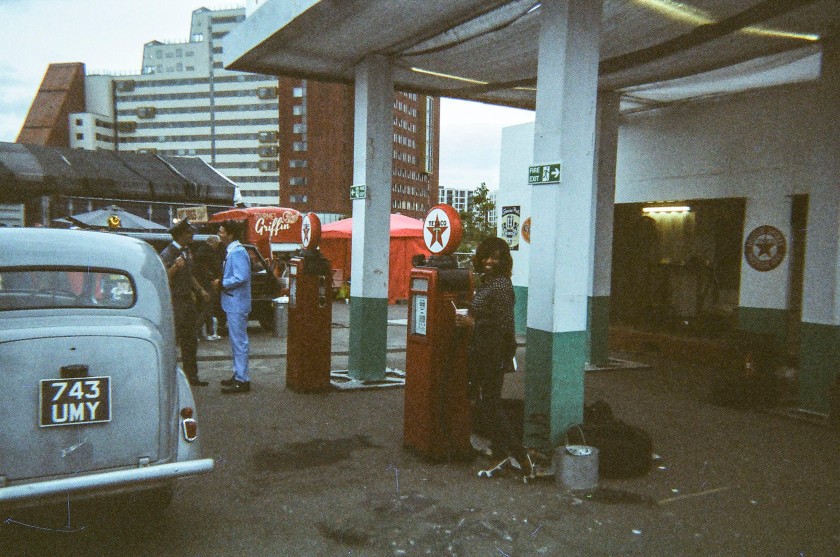 We walked around, and then had a burger at the diner. One of the cool things was that there were actors around, in character, interacting with the public. We got told off by a loud waiter at the diner for hogging the ketchup (who will then run for major in the 80s part of the film), we visited Doc’s house in the 50s and heard how he hadn’t invented time travelling yet, we listened to the radio and visited the radio station, right at the end of the street. 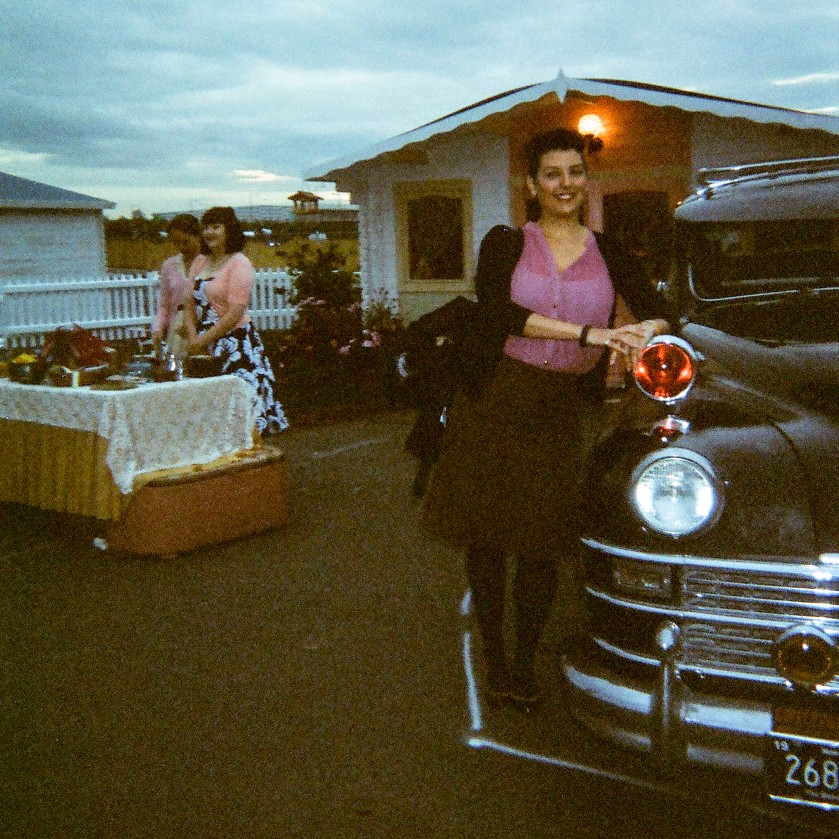 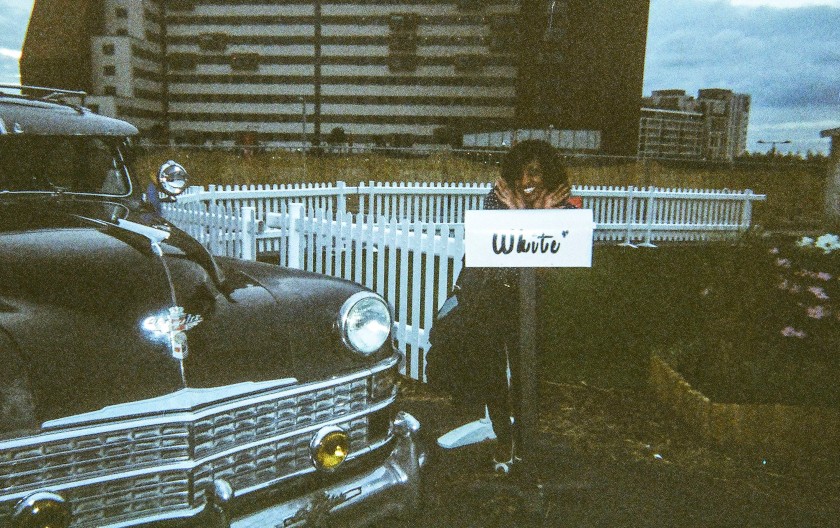 The patch of grass in the middle of the square was scattered with blankets, ready for the film. We finally made our way to find a spot where to sit down and enjoy the show, which we could have chosen better given the rancid sweat smell one of the guys just behind us had – every time he moved, clapped or otherwise existed, I would need to sink my nose on my cheap (taste, not price) cup of red wine.

During the film, some scenes were acted out in front of our eyes. We saw the DeLorean, we saw Marty McFly escape the bad guys by skating away with the help of a car. We saw George punch Biff on the face to rescue Lorraine, and cheered and roared as the love birds strolled away through the square.

The moment we were all expecting was fast approaching. It was almost 10:04 pm on Saturday, 12th November 1955. In order for Marty to return safely to 1985, he needed to drive the DeLorean through the street on the side of the square, getting the wire to touch the cables right at the exact moment the lightning stroke, in order to generate the 1.21 gigawatts the DeLorean needed to travel in time.

Watching the film many years ago, I remember being on edge during this nail biting part. Sitting on the grass, watching the film again on Saturday, and seeing Doc dangling from the clock tower in front of my eyes, boy, that was another thing entirely! I had never cheered so loud in my life as when Doc zip-lined down to the town square, managed to plug the cable, the lightning stroke and Marty travelled back to 1985 amidst strobe lights and firework-style sparks. The whole town square were on their feet, clapping and hooting and cheering.

After the film ended, we picked up a couple of photos we had taken earlier, and then visited one of the bars briefly, before heading back home. 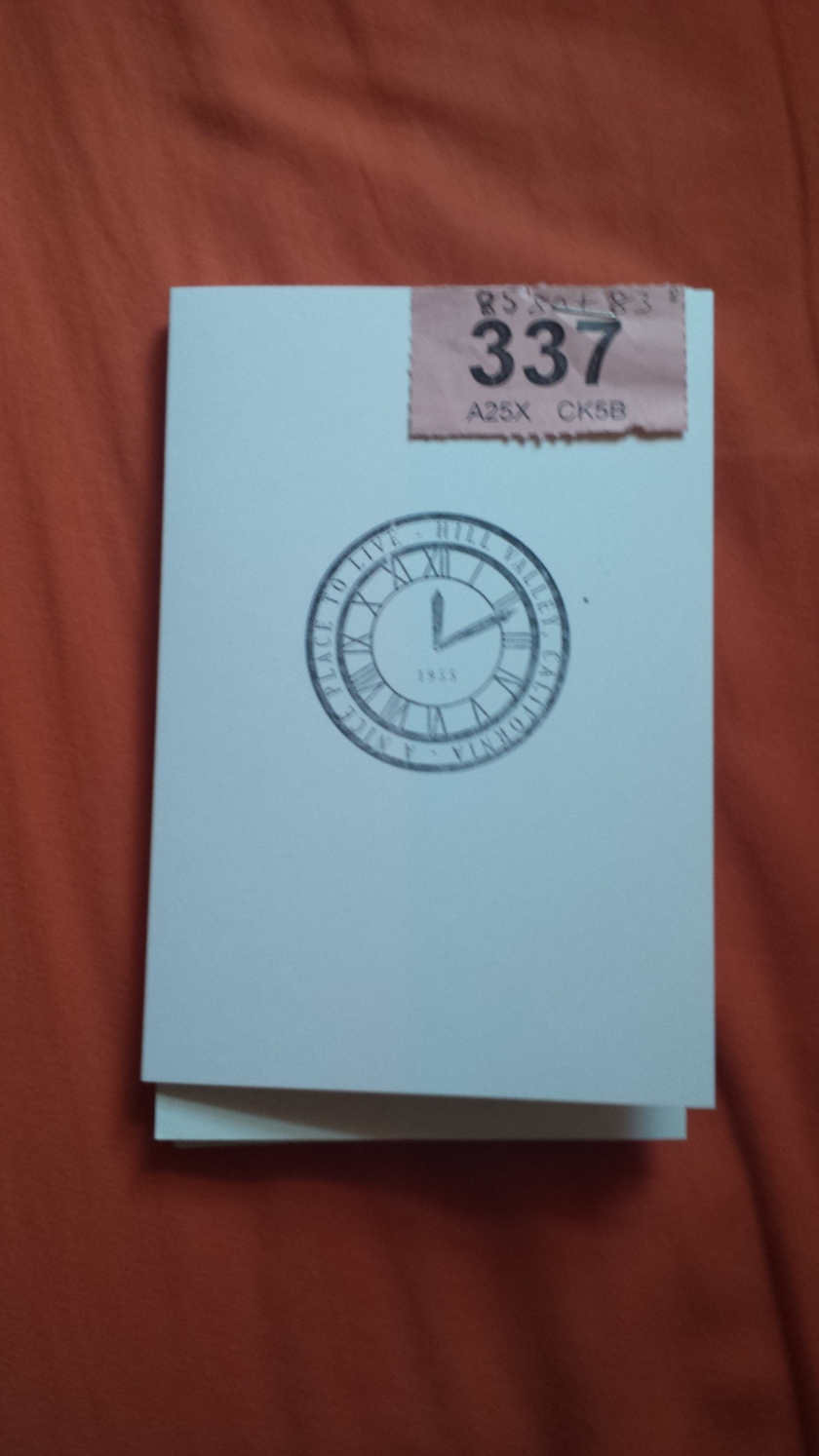 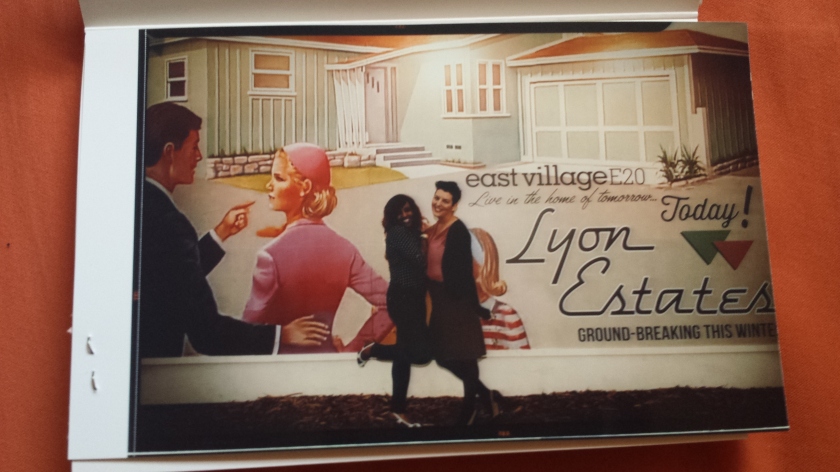 We arrived late, so we decided to postpone the dress form DIY to a different day (and also because eating raclette on Sunday would have messed up with my Body Plan completely!)

So, as you can see, making plans is great, but ignoring those plans can be awesome! My weekend went from being a normal one, with some interesting activities, to one packed with competition, drama, action, fun, and time travel.

I wonder what next weekend will bring…

All photos were taken by either Oummou Diallo or myself, except the business card, which was created by the guys at www.hillvalleycalifornia.com and the Lyon Estates photo, which was taken by the lovely ladies at the entrance of the event