This past weekend was interesting.

At first, I sort of had forgotten a friend was coming over (sorry Ouiza!), so when someone else reminded me (thanks Brian!), it sort of made my day.

On Friday, I wanted to go to a gig of a friend of a friend, and a few people said they would join, but finally, nobody wanted to come or had made other plans, so I found myself alone. I decided not to go, because I didn’t want to be on my own, and I went “home” (Su’s place). Now I think I should have gone on my own anyway, because I’m pretty sure it would have been interesting and fun. Ah well, my loss. Hopefully next time I won’t care about others and just do my thing.

Saturday was a bit busy. My visiting friend invited me to a birthday party, and I wasn’t sure whether to attend or not, but since it was in Shoreditch, and I never get to go out there, I decided to go. It’s not that I didn’t want to see my friend, but you know, I already had plans with her on Sunday anyway!

When I arrived at The Crown and Shuttle, I wasn’t sure if she was there already, and since I didn’t know anyone else in the group, I didn’t know whether to go in or wait outside a bit longer. In the end, and after a chat and a pep talk from one of the bouncers (and maybe even dinner offer, which I politely dismissed) I went in. The bar seemed OK, a bit too crowded, and not too big. I couldn’t see my friend so I kept walking, and then I stepped outside to the beer garden. My jaw pretty much dropped. It was massive and it was packed. My first thought was that I was never going to find her in that crowd. I started walking around, trying to study every face until I recognised my friend’s. At some point, I heard my name being called out and there she was. I had just walked in front of her but hadn’t seen her. In my defense, she wasn’t facing my way when I passed.

Introductions made, it was a fun night. We stayed there for a while and then decided to move somewhere else. Not sure if you’ve gone out in Shoreditch, but after 10pm every place is packed and you usually have to pay to enter. I got a flyer from some random guy promoting a bar and since the entry was free, we went exploring. The Shutterbug turned out to be quite nice, outside in their beer garden/parking lot. Inside it was small and the music too loud. The barman was very energetic and gestured a lot, which wasn’t great for my eyes since I was standing by the bar trying to order and he had just squeezed some lemon for a drink. Ouch.

Outside, I began chatting to some people who turned out to be lovely. We exchanged numbers and might be meeting next weekend.

As you know me, every trip turns into an adventure. I always manage to make every journey a quest. I was meant to take the overground back home and I managed to miss the last one. While at the platform. In my defense, once again, it did say that there was a New Cross Gate train coming in four minutes, and then it was delayed, and then the overground was closed and the New Cross Gate train never arrived. I wasn’t the only one left behind. I managed to find a night bus home and when trying to get to the bus stop, I bumped into one of my good friends because, you know, London. What are the odds?

I finally got to my bus and believe it or not, I bumped into one of my teachers from African Drumming and his girlfriend, because London is such a small place, it’s like we’re all bumping into each other all the time. That was great because the bus took the scenic route and they were going to the same area as I was, so we chatted all the way.

I ended up getting home at 2am, a bit tipsy. Not good.

On Sunday, I pretty much woke up, showered and went to Clapham South to meet my friend for a Sunday roast at The Devonshire. Yes, it takes me about an hour to get to Clapham. Yes, it’s totally worth it. 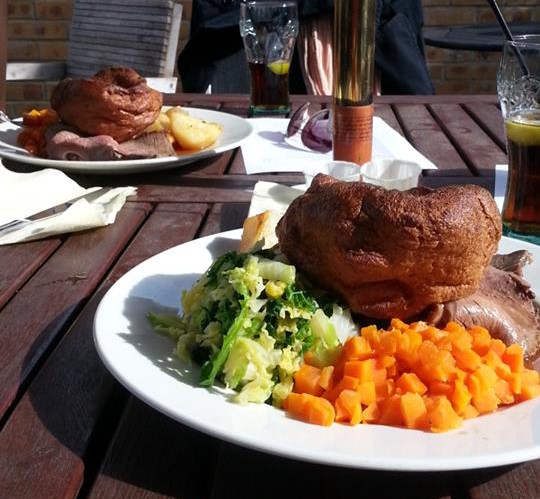 Look at the size of those Yorkshire puddings!
We were sitting in the beer garden, enjoying the sunshine. We also had dessert. 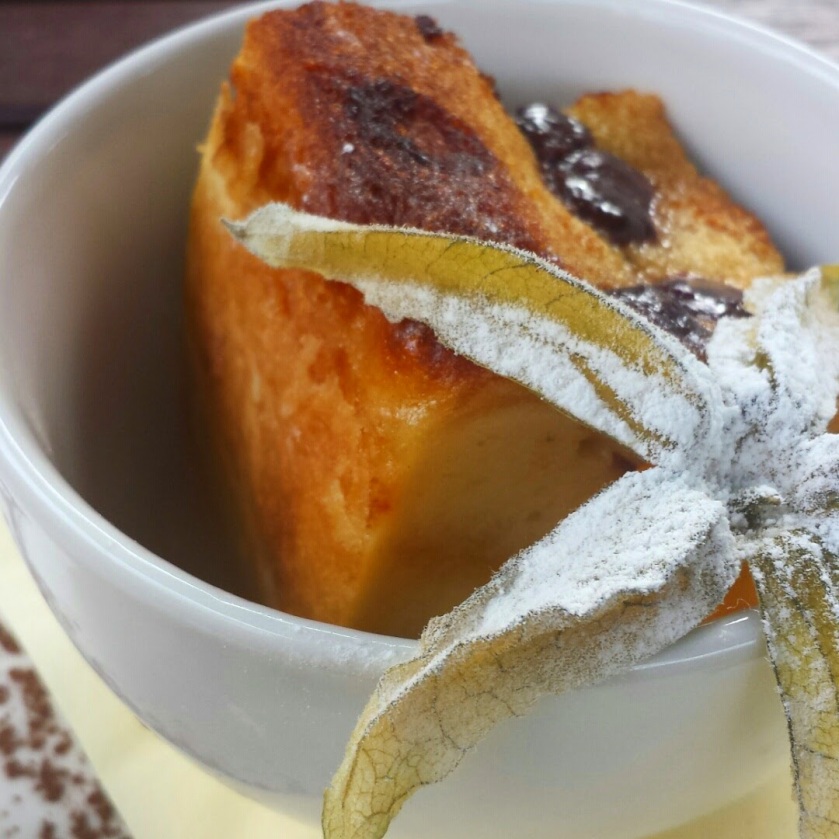 The Northern line, being its usual self, decided to close. I still have no idea why, but since we couldn’t get any direct buses to anywhere near where we wanted to go, we took a bus to Brixton and then a different tube line. Finally, we got to Charing Cross to meet up with another group of her friends. We went to have a drink on The Tattershall Castle, enjoying the weather. All her friends are so sweet.

We ended the evening by crossing the river back to Southbank, and taking some pictures.

It was a tiring weekend, but it was a good one.

Today, I’ve been invited to a leaving party on Friday, quite randomly, from one of the girls working in the same building, so I’m quite happy to see things are starting to go back to normal and my calendar is filling up once again quite nicely.

Key highlights of the weekend? Finally getting my first (short) leather jacket, and a bargain! It’s from Karl Lagerfeld, I bought it at TKMaxx.

I never saw my friend’s cat when I was supposed to cat-sit him… but on my way back home from her place I saw a pretty (hideous) plate and water jug with a note that said “Take me, please” and since I’ve been wanting one for a while, I took it. I’ve put it away for now, but I’ll try to do something to it.

One of the guys from this weekend also asked me to join his network on LinkedIn, which made me quite happy because he sounded very knowledgeable in his field and he seemed such a lovely person.

On another note, I am sporting a massive bruise on my left arm and I have no idea how I got it. I wasn’t that drunk!

I also think I’ve found myself a stalker. Kids, online dating and dating apps are dangerous. Well, I don’t think this guy is dangerous, he’s just a massive pain on the backside. It seems his life is pretty boring and he keeps texting me so I can amuse him with my stories. We haven’t even had a first date yet (not that we’re going to have one anymore) and I’ve already had enough (and sure enough, as I’m typing this, there he is, texting me again).

Finally, I’m trying to finish a book a friend from work lent me, it’s Collected Stories, by Gabriel Garcia Marquez. I have a few short stories books, and I am convinced they really aren’t my thing. On top of that, I just can’t read Garcia Marquez in one go, his writing tires me. I told one of my friends that it feels like I’m trying to run through mud (believe me, I’ve done it, I know how it feels). It’s still a good book, but it’s being painful to read. I’m proud that I did recognise the characters from his book One Hundred Years of Solitude, which I also read, ages ago. I was reading one of the stories and they mentioned some Col. Aureliano Buendia, and his brother, Jose Arcadio. So, hey, I felt quite cultivated and all that.

I can’t wait to start reading The Shock of the Fall, by Nathan Filer. We are starting a global book club at work, which I’m organising, and that’s the first book we’re reading. I hope it’s as good as everybody says and that people will like it, as I would be quite embarrassed if the book club didn’t succeed at all. So far, people from many of our offices want to take part, from Sydney, to Plano, Toronto, and of course London! We will be hosting face to face meetings, and also online discussions, so let’s see how it all ends up! Very exciting! Who knows, maybe I’ll write a review here…

I feel like there’s a lot to write about, but maybe I’ll leave the rest for another time. I still have to work on the photos from Strasbourg, and as soon as I’ve made them presentable I’ll share them with all of you. Until then, take care and let me know what you’re up to these days (one can never have too many ideas of stuff to do!)