Recently, I got curious about the beginning of this blog. I’ve been blogging for the past three years with more or less frequency on this same site, only it had a different name back then; I can’t really remember how it all felt back then, so I decided to have a look around the archives (which you can also do by filtering the contents using the drop-down arrow just below the main category menu and above the featured posts).

My first post was aptly titled Welcome, and introduction, I’m nothing if not organised, I guess. It was interesting to read it again, and realise that of all the things I listed I wanted to write about, I’ve done most of them. I still like drawing, but my drawings are so bad that I never want to show them to anyone (although that’s something I might be planning to change this year, we’ll see). Everything else is still there: photography, crafts, writing. It’s nice to see that after three years my hobbies and passions are pretty similar.

The thing that surprises me the most is how awful my English was, even after seven years in London! Not that it has improved a lot, but I can see what people meant when they said my grammar was weird. Even I find it weird now!

It seems, three years ago, I was thinking about leaving my current company, as I also wrote about updating my CV. As it turns out, I never left, even though I changed role. I was pretty unhappy at the time, and it’s had its ups and downs, and while sometimes I wonder if I shouldn’t just leave already, overall I’m quite comfortable with what I’m doing now. Challenging enough and fun, even if sometimes I have to do menial tasks, like organising a storage room (wait until I bring out my colour coding skills!!!)

As I kept reading, I came across my trip to Argentina. So many good memories. I met a bunch of people there (some of which I’ve seen again here in London), and I even had a fling with an Argentine man (I’ve never shared that in here before!). It was a great trip, and I miss it. My amazing friend Lucia is getting married soon, and I’m secretly hoping she’ll have the wedding there, so I have an excuse to go back (wait, that means I should probably start saving now!!! Sh-!)

I found the fact that I was struggling to find a photo editor very funny, mainly because I needed to straighten the photos. Three years on, and I still have the same arch-nemesis: all my photos are crooked straight from the camera! I will never get that right…

Ah, my little craft projects (here)! I did my first sewing project, and started crochet. It’s amazing how long it’s been.

That was my very first crochet chain ever… And how a month later I made these:

And I shared the Yoda hat I crocheted for my ski trip with work that year at the end of March: 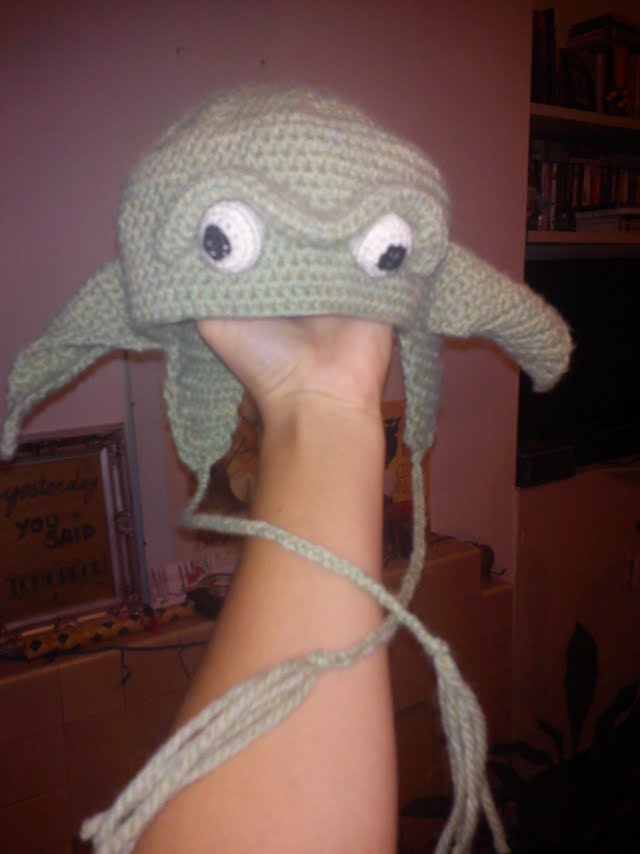 And of course, the lampshade that I made as a present to Su, which you can see here.

It seems I was constantly busy. I was posting sporadically during that first year. Running club, French lessons, African drumming, bootcamp… I was like an action figure back then! It reminds me of last year, when I was doing Zumba, and running, and doing pilates and boxercise. I miss all that, to be honest, being busy almost everyday, but I’m too tired (and broke) to keep it up.

Speaking about the running club… It’s amazing to see how far I’ve come, literally and figuratively. I remember I was the first person signing up for the Nike Running Club in Clapham Common (and the last one finishing the last run of the official club that ran during that summer, actually). I remember it was only 5k, and for weeks I couldn’t even run that distance and I always ended up taking a shortcut, so I could finish around the same time as everyone else. It was very tough, especially my running nemesis, a big tree that marked… what was it, 2k? It became some sort of a phobia, and a challenge, but truth was I never managed to get to that tree without stopping to walk before.

I remember the day I managed to run the whole course without stopping (I was dressed as a superhero for a competition that earnt me my Nike Fuelband!). And to prove that I really don’t have much shame left, here’s proof that I was indeed wearing my underwear on top of my leggings, like a true superhero!

The costume was homemade, using my running leggings, some knickers I found at Miss Selfridges (which I bought specifically for this costume, but which might or might not have come in handy when wearing really tight dresses and skirts!), a dress I found at a charity shop that I cut to make a top, fabric to hold curtains made the belt, a cape that I cut to make it short (I wouldn’t want a long cape, because it would be a safety hazard!) and the logo on the cape, which I sew myself! Of course that outfit made me powerful enough to run 5k!

Now, a 5k run is nothing to me, I’ve done a few 10k, and I’ve even run a half marathon; I’ve run dressed as a super heroine, with zombie makeup, dressed as a Santa, first thing in the morning, last thing in the evening, by the river, in the city, in the forest, in mud… I’ve come a long way.

I’m also glad to see many of my priorities haven’t changed really: working on myself, trying to live a happy life, and try to make people smile, for example. Also, interesting enough, to see in writing how I’ve always had my down days, as I called them in a post, the ones when I switch to standby mode and I don’t want to get out of bed. I guess that means I’m truly an introvert (it’s either that, or something less healthy, like a disorder) and being too active and social does drain my energy.

There’s been some darker posts, but also some a bit funnier, like a list of things that are worse than a rejection (note to self: there are 50 things worse than a rejection, get your s**t together, lady!), or the whole end of the world business (now that was disappointing, wasn’t it?). I’ve even talked about zombies!

Anyway, I would like to finish this post with some stats for you on the number of posts I’ve published each year so far, how many views and visits I’ve received, etc. Here’s a pretty table:

It’s interesting to see that while the number of views and visitors has increased a lot, the interaction hasn’t. I wonder why. Maybe it’s because you don’t think the content is interesting enough to comment, or maybe because you don’t feel comfortable writing your thoughts here; I can only assume (possibly wrongly!). However, the stats tell me that you guys read this blog, and a lot! Thanks!

What about the top countries where you’re based? Well, that’s not really much of a surprise either!

Most of my readers come from the UK, I guess mostly my friends and everyone on my Facebook (only last year there were over 1,500 of you! OK, not really, they were only views, but a girl can wish, right?). Interestingly enough, the first year blogging saw Spain as the second country, but it quickly fell behind to third place after the US (last year I had over 600 US-based views, and only 322 coming from Spain), and even more interesting is that this year so far Spain is falling to a fourth place after Brazil! It’s too early to tell what’s going to happen during the year, but I’m looking forward to seeing it!

Currently, at time of writing this, I have a total of 218 followers, between WordPress, email subscription, and different social media platforms, which is remarkable. I know in blogging years (bad attempt at a joke, I give you that), it’s a small number, but to think that over 200 people chose, at some point, to click on a follow button and receive notifications whenever I post something new here… Wow! Thank you very much to all of you, I truly appreciate it, and it makes me strive to write better stuff for all of you.

Right, this post has taken me a bit longer than I had expected, but I hope you enjoyed it. I certainly have! It’s amazing the difference between remembering things and seeing them written down as they happened, having an actual account of what’s happened to me in the past three years.

Do you blog? Do you keep a diary? Or maybe you use Instagram or Facebook as a mean of keeping track? Let me know! I’m curious about it!