I don’t know what’s going on these days, but I keep forgetting to post on the blog! I am so focused on everything else that when I remember about it, it’s usually too late at night and I’m too tired to even lift a finger.

They say when you miss posts to just write a new one like nothing happened, so it doesn’t seem like you’re apologising or something, but I’m not entirely sure that’s the way to go. If you have a schedule (supposedly), and you miss it, then surely you need to let your readers know what’s going on, right?

As you know, I’m doing Whole30 (I’m on day 17, yay!) and I both love it and hate it. I love it because it’s true I’m feeling better overall. I don’t feel bloated after eating my meals and I believe I might have dropped a size or so. I hate it because it involves a lot of planning, and I’m terrible at that. Normally, if I find myself with an empty fridge, I would just eat cereals, or a toast with baked beans, or something else. Now I can’t do that (seriously, how can I miss bread this much?) and I end up having scrambled eggs with something. I know I need to go grocery shopping, but I am so broke already this month, it scares me.

Still, day 17 (seriously, 17 days without bread!) is quite an accomplishment. During this period, I’ve had a team lunch, and leaving drinks, and I’ve survived it. I’ve cooked many different things, and found a nice breakfast pattern (although I hate all the washing up involved in this plan). So that’s good.

If I thought this wasn’t difficult enough, I’ve decided enough is enough and started a massive clean up of my home. I bought a book (Kindle edition) called The Life-Changing Magic of Tidying Up, by Marie Kondo (you might have seen the KonMari Method on Pinterest and Instagram). The method boils down to one simple question…

Does it bring you joy?

In the past, whenever I’ve tidied and “decluttered” (yup, quotation marks because I now realise I have never really done so), I’ve focused on what I wanted to throw away (not much), and whether I could use stuff for something, if it was in a good or bad state, how much money it cost me, etc. So in the end, I ended up not throwing anything away.

By asking that simple question, I’ve realised I’ve been holding onto so many things that didn’t bring me joy and I just was keeping for all the wrong reasons.

Marie Kondo has a very specific order in which you need to discard items, starting with the easiest one (clothes) and finishing with the hardest (keepsakes and mementos). She argues that by the time you reach the sentimental stuff, your decision skills will be fine-tuned and strong. Even within each category, she advises to create subcategories if you have lots of items, such as tops, bottoms, scarves and accessories, shoes, outerwear, etc. Yes, Kondo advises us to tidy by category, and not by room.

I’ve always tidied by room, and it’s true that sometimes you might have the same item repeated in different places. If you grab everything of the same category and display it on the floor, it’s easier to see what’s been hiding for too long (so long you didn’t even remember you had it) and what items are repeated. I didn’t want to throw everything on the floor (I hate carpet), so I threw everything on the sofa. Well, not everything, just my tops:

Yes, that pile is only my tops. There might be some other items mixed in, probably because I got fed up of pre-sorting. For a whole day, my living room looked like a room out of Hoarders, and I had to try to put everything on the side so we could actually eat and all that. When I finished with the clothes, I had four bags to donate, and three to throw away (shoes and handbags included!):

I know it doesn’t seem like much, but considering that the whole top of my wardrobe is now empty, all my hanging clothes fit, and I have plenty of storage space now in my drawers, I’d say it’s a success! 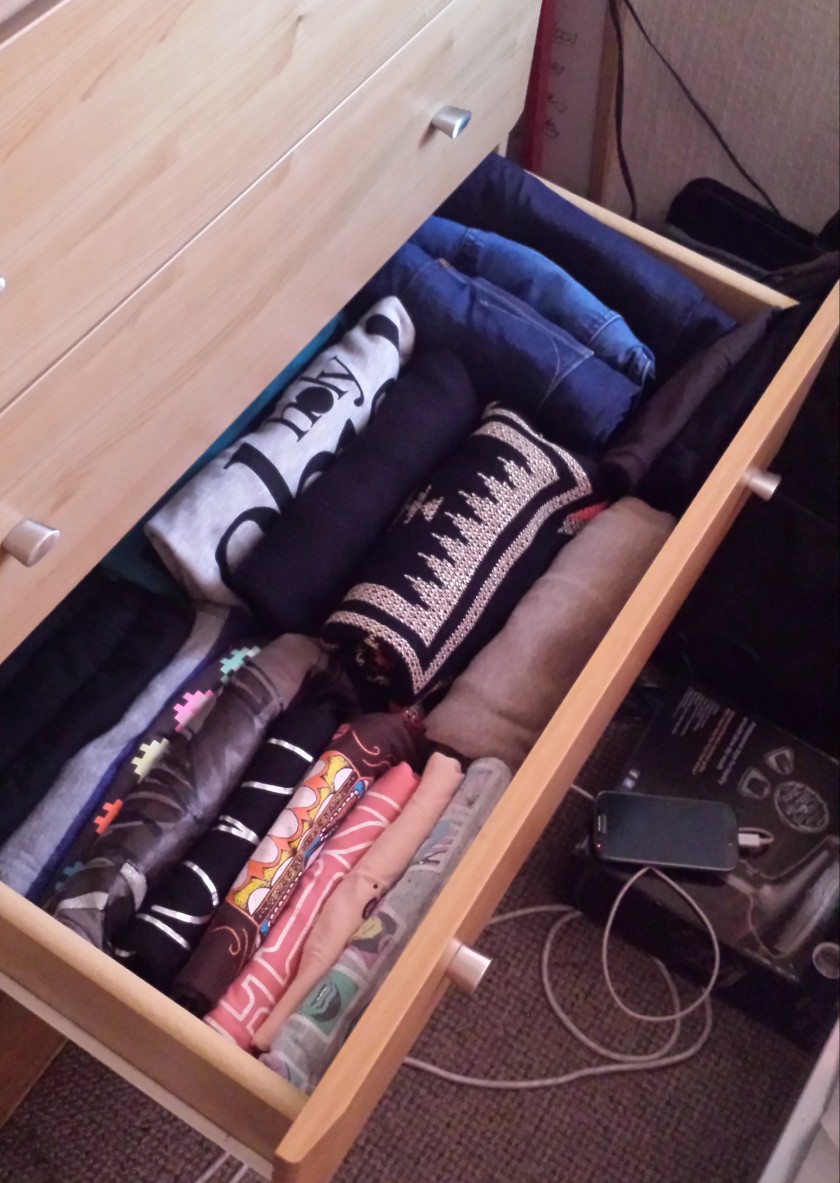 This drawer was packed to the top with tops I haven’t worn in years and others so worn they were falling apart. Jumpers and trousers in a drawer? Not a chance! Thanks to discarding a lot of stuff, and to KonMari’s clever way of folding, now I have everything in the same drawer.

This drawer was already sort of organised pre-KonMari, but I was still keeping all the t-shirts from all the runs I’ve taken part in, as well as all the Nike free tops from the training sessions and the running club. I decided it was time to get rid of all of those. Collect memories, not things, or something like that. I’ve kept the ones I really liked and that served a purpose (being dri-fit, for example!) and the rest, thanks for your service. Good bye! 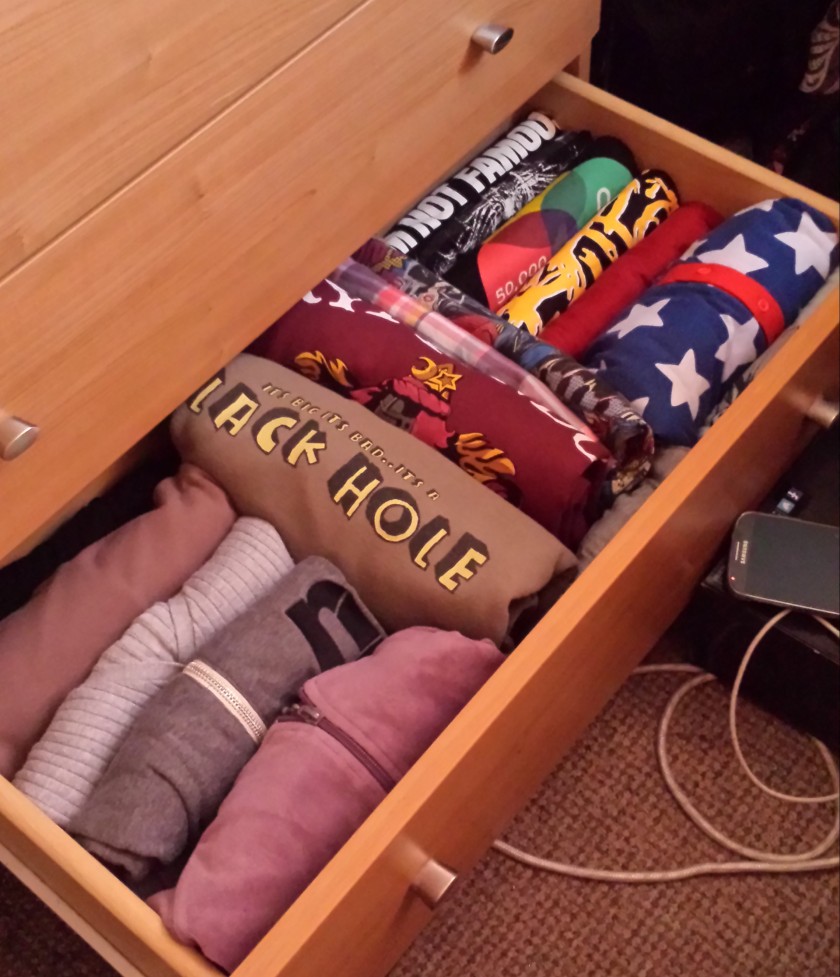 The pyjamas were properly overflowing this drawer. Not only that, but most of my PJs were actually proper PJ bottoms and random t-shirts. I had stuff in there that had seen better days, and others still in the packaging. In reality, I only use the same three or four on rotation, so I got rid of everything I wasn’t in love with (and even got rid of my favourite bottoms, because I thought it was time for a change). Since that drawer was half-empty (a positive statement in this case!), I decided to put in there my loungewear and hoodies.

Jumpers, tracksuit bottoms, and hoodies used to be overflowing the shelf in my wardrobe, and now they all fit neatly within two drawers. Unbelievable.

Not only that, but even though my room looks like a hurricane has just happened, I feel like a massive weight has been lifted off my shoulders.

The most difficult part was the shoes. I love shoes (my nickname isn’t marz shoes for nothing, you know) and I knew that would be hard. However, I followed the KonMari Method and if it didn’t spark joy, off they went. I had shoes everywhere before, and now… Well, they’re everywhere too, but because I haven’t finished tidying them. I threw away a lot of them that were not in perfect condition, and some of my favourite ones (which are still good) I’ve shared the pictures on Facebook, hoping that they can make some of my friends happy.

Today, I tackled the bags, separated the stuff to throw and to donate, and then started with the books. Now, I have LOTS of books. When I say lots, I mean lots.

I contacted a second hand seller to see if they were interested in any of my books, as well as posting pictures on Facebook again, to see whether my friends want any. Here’s a glimpse of the books I’m getting rid of, and these are only some of the fiction ones:

This photo is embarrassing on purpose. I mean, sexy vampires and Christian Grey, all together. Don’t judge me!

I seem to have a thing for magician stuff and Trudy Canavan, so I tried to display them all together too.

Twilight, or how could I hate if I’ve never read them?

The second and third from the top are books I’ve never read. They’re in perfect condition. Also, I believe I never finally read Inheritance, even though I loved the whole Eragon series…

A bit of everything… To showcase my random taste in books. The top ones are from the bookclub (Ancillary Justice is a signed copy, by the way) and the rest… Well, you can see. 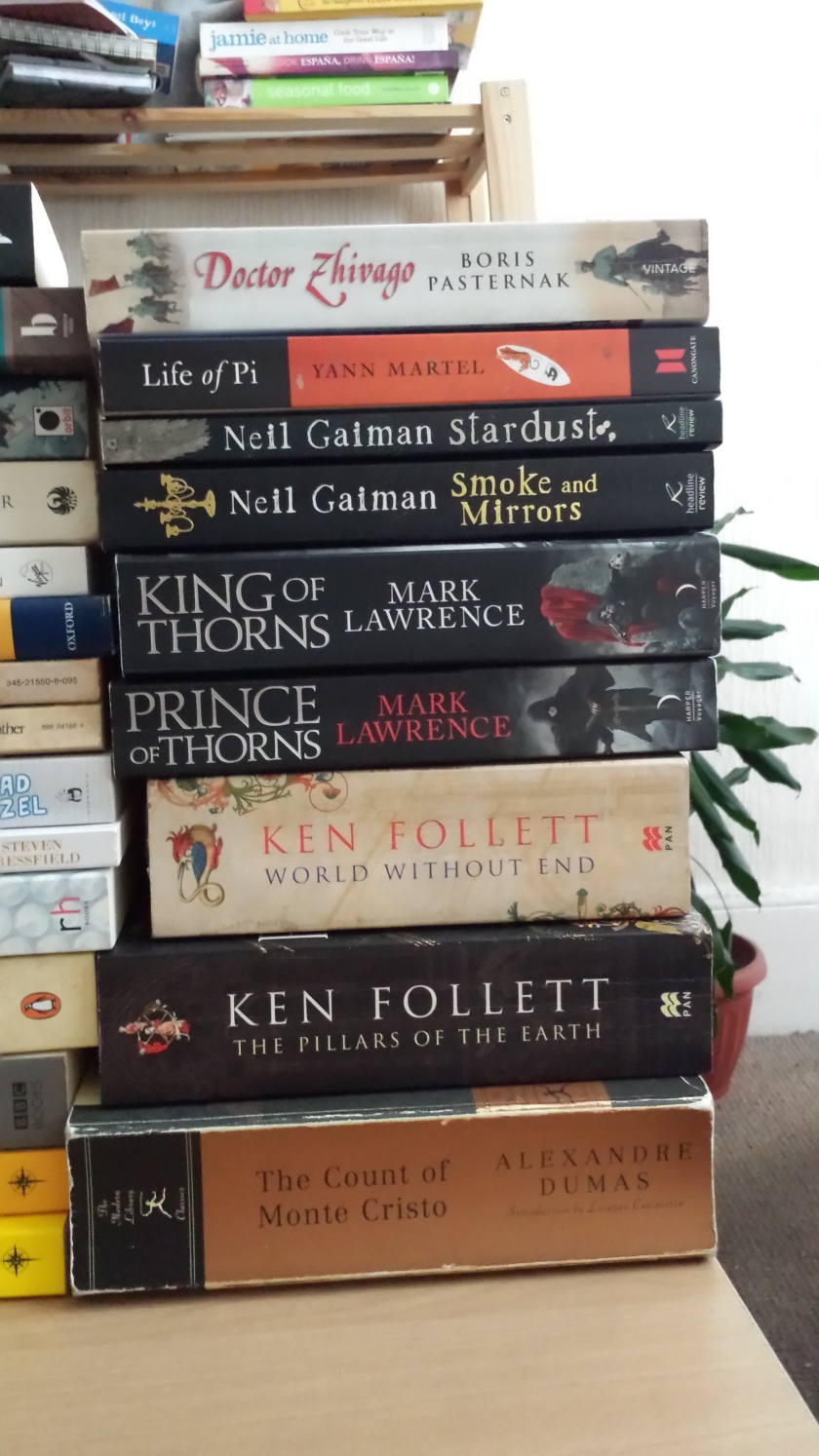 You can’t see the pile of books I’m keeping so far, mainly because I haven’t taken a picture of it, but so far I’m keeping 15 books. Yes, 15. I haven’t finished yet, but you can see how well this is going.

The feeling I have a the moment is of lightness and calmness. It sounds stupid, I know, but knowing that I’m only keeping things I really want around me is making me feel more energised. I had some of these books inside boxes at the bottom of my wardrobe (reason why I hadn’t finished tidying the shoes yet), under piles of paper, and even in a suitcase in the storage cupboard. Those books were definitely not happy to be stored in the dark.

Some books I’ve read them many times (not getting rid of Lord of the Rings, or The Name of the Wind!!) and others I haven’t even touched them. Marie Kondo tells us that realistically, if we have had a book for months that we’ve been meaning to read, but we have been reading other stuff in the meantime, chances are we’re never going to read it. I wouldn’t have agreed in the past, but since I got my Kindle, I only want to keep some books that actually make me happy. If I really want to read one of the books I’m discarding, I’ll get it again.

There’s still plenty of things to tidy: papers, miscellaneous, kitchen, bathroom, before we reach the sentimental stuff. I’m already picturing in my mind the things I want to keep and throw away from each category, and I only wish I had a full month of holidays to get through everything at once.

This feeling is addictive!