I finally got around to work on the photos from my trip to Strasbourg, which now feels like a life away.

If you remember, I went there for a reunion. At university, here in the UK, it was always four of us together all the time, The Pack, Judit, Sabine (Aissa), Jean Marie and me. We hadn’t seen each other for a long time (in my case, ten years!) and we decided to meet there, since none of us girls knew Strasbourg and he lives there. Of course, you know I see Aissa pretty much every few months, but that’s not the point. The Pack was back together, for one weekend!

I’m not going to go into detail about the trip, I will just say that it was a lot of fun. I was glad to see we hadn’t changed that much, and we could still have a great time together.

Strasbourg is amazing. The city has a great history, which makes the architecture strikingly beautiful. During its history, it has passed from German and French hands more times than anyone can remember. You can easily differentiate which areas belonged to whom through the architecture. If in doubt, look at the windows! Jean Marie told me the French didn’t know how to make big panelled windows, and so they filled their buildings with small glass squares. Whenever the city went back to the Germans, they would build massive windows, just because they could (and the French hated it!) I have no clue whether that story is true, and a Google search hasn’t helped me much… I think it’s a great story though, so I’ll be sticking to it for the time being. 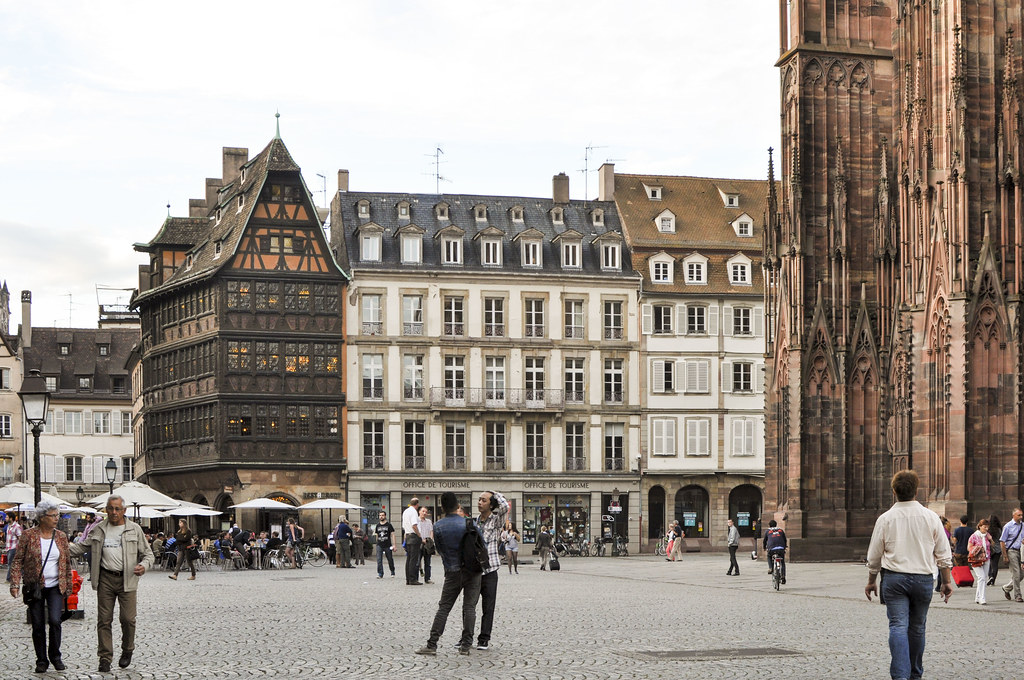 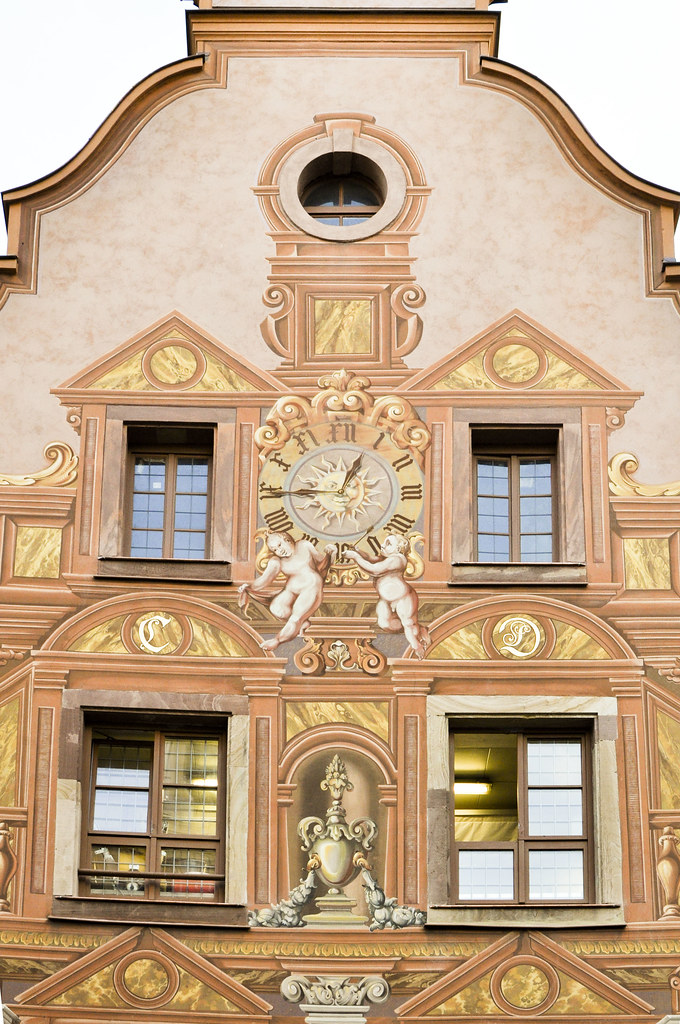 The constant battle for power between Germany and France, as well as the World Wars, are represented in the best way possible in this sculpture of the Motherland, crying over her two children (one looks towards France, the other towards Germany), who are dying from fighting each other (and holding hands in their last moments). Doesn’t it make you want to cry? See here, and here. 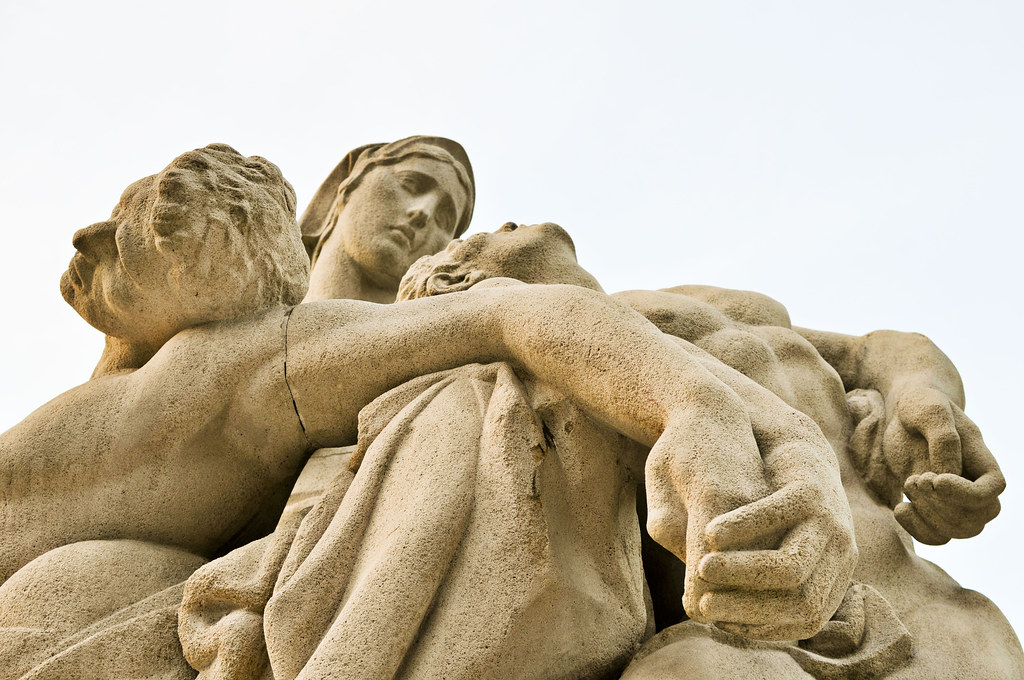 Did you know that Jews had to leave by 10pm? My friend told me that.

A revolution in 1332 resulted in a broad-based city government with participation of the guilds, and Strasbourg declared itself a free republic. A murderous plague was followed on February 14, 1349 by one of the first and worst pogroms in pre-modern history : several hundreds Jews were publicly burnt and the rest of them expelled of the city. Until the end of the 18th century, Jews would be forbidden to remain in town after 10 pm. –Citizendum, Strasbourg

He also said you can still hear the bells for longer than they should at 10pm. Nobody has to leave the city anymore, but it seems the tradition has been kept by the churches. I don’t know if that is so, since I didn’t get to be near a church at 10pm (usually in a pub or visiting the Parliament).

Yes, we visited the European Parliament, and I was quite taken with the Inner Court of the Louise Weiss building. Its lines and the repetition of a pattern could have kept me entertained for hours. I just wish I was a better photographer, to take advantage of places like this. 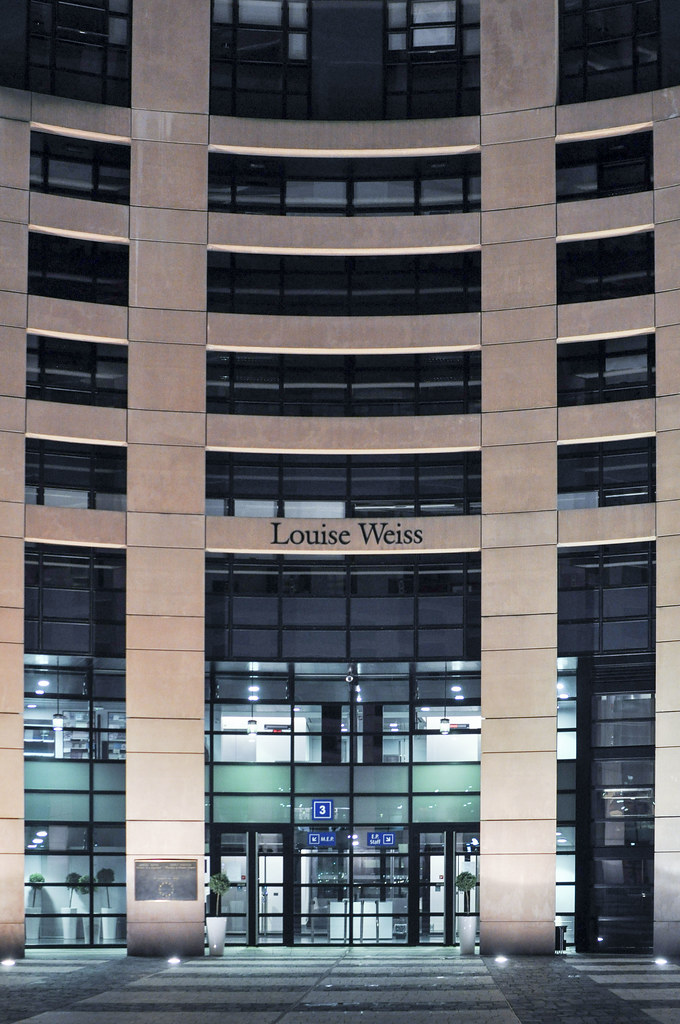 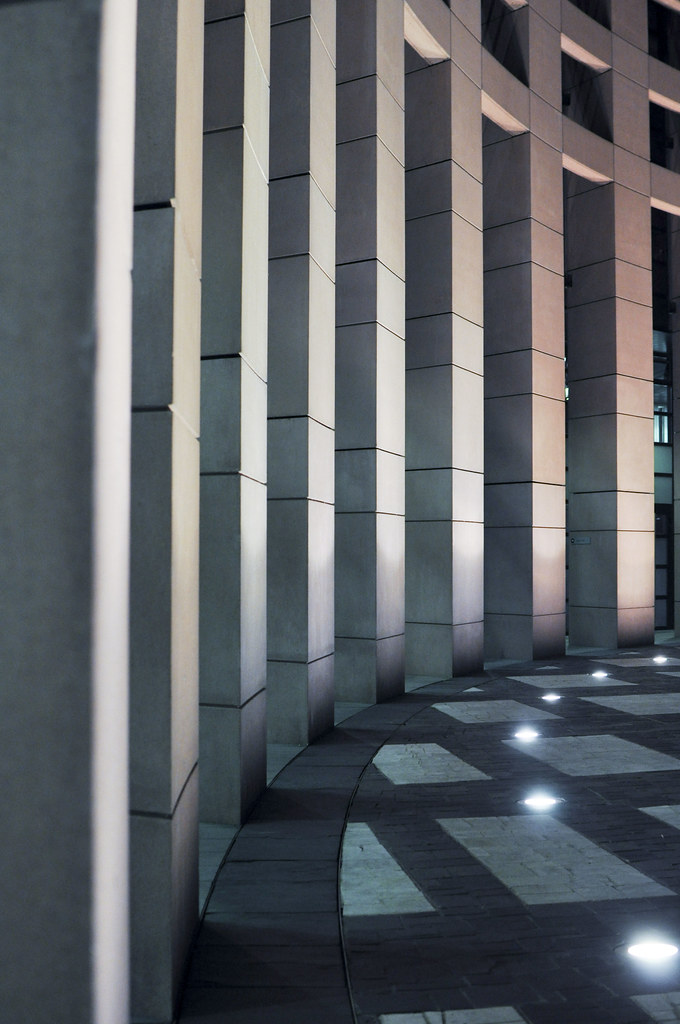 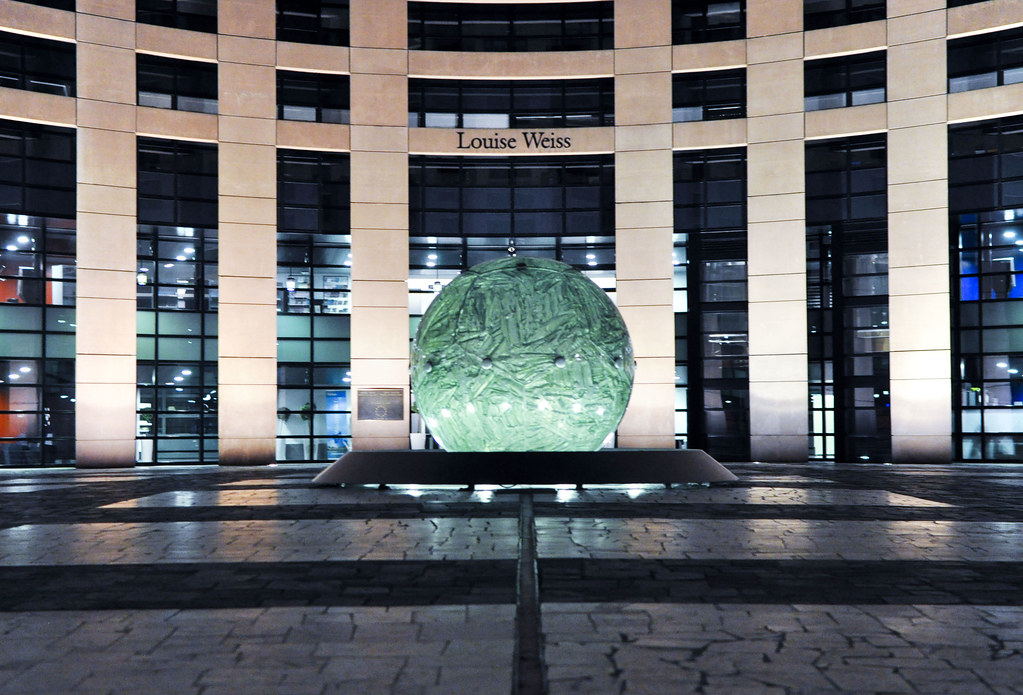 Does this building looked wonky to you? Is it just my eyes? I wish I managed to get the horizon straight from the camera in my pictures… between my tendency to tilt the camera, and the fact that this picture has way too many lines fading into the sky… I never stood a chance, did I? Ha-ha 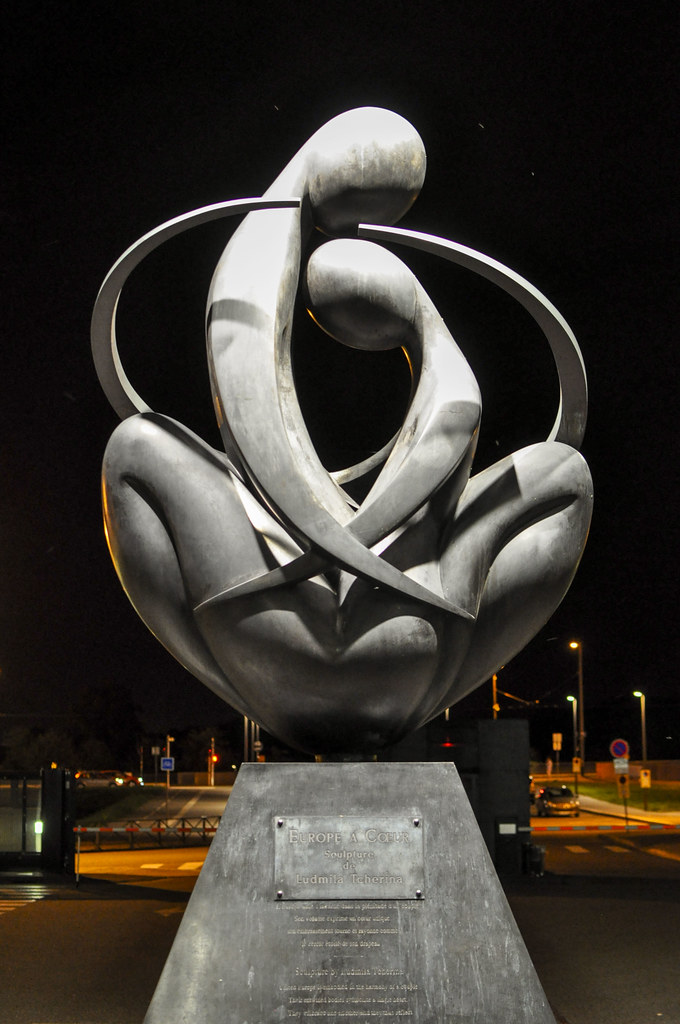 When we saw this sculpture, my friends thought they were a mother and a child. I, on the other hand, have a dirtier mind, and I automatically saw a couple… When we approached the sign, here’s what it read:

Europe a Coeur, Sculpture by Ludmila Tcherina.
On the sculpture: “United Europe is embodied in the harmony of a couple. Their entwined bodies symbolize a single heart. They embrace one another and they thus reflect the circle of stars on the European Flag.”

As I said, Strasbourg has a lot of history. However, the main thing that overpowers everything else is the Cathedral. It’s made of sandstone, and at 142 metres, it towers over the city. 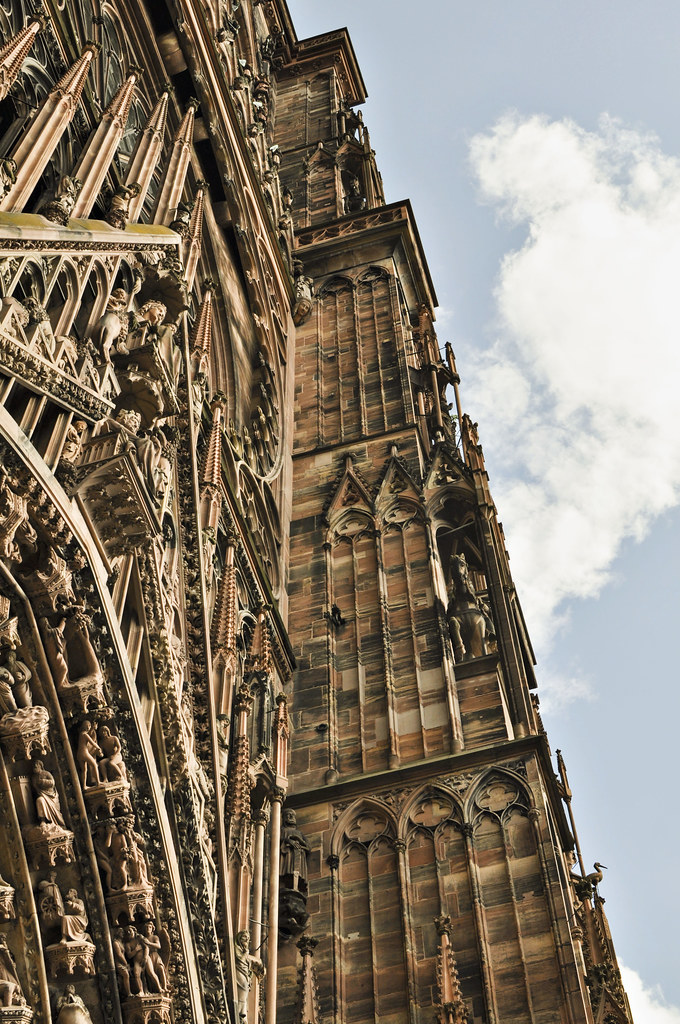 The sandstone makes the cathedral a monstrous red giant (picture a shade similar to that of the Grand Canyon, only maybe darker because of civilization). One can only imagine how the inhabitants of the city and surrounding areas could feel terrified and humbled by its power and presence. 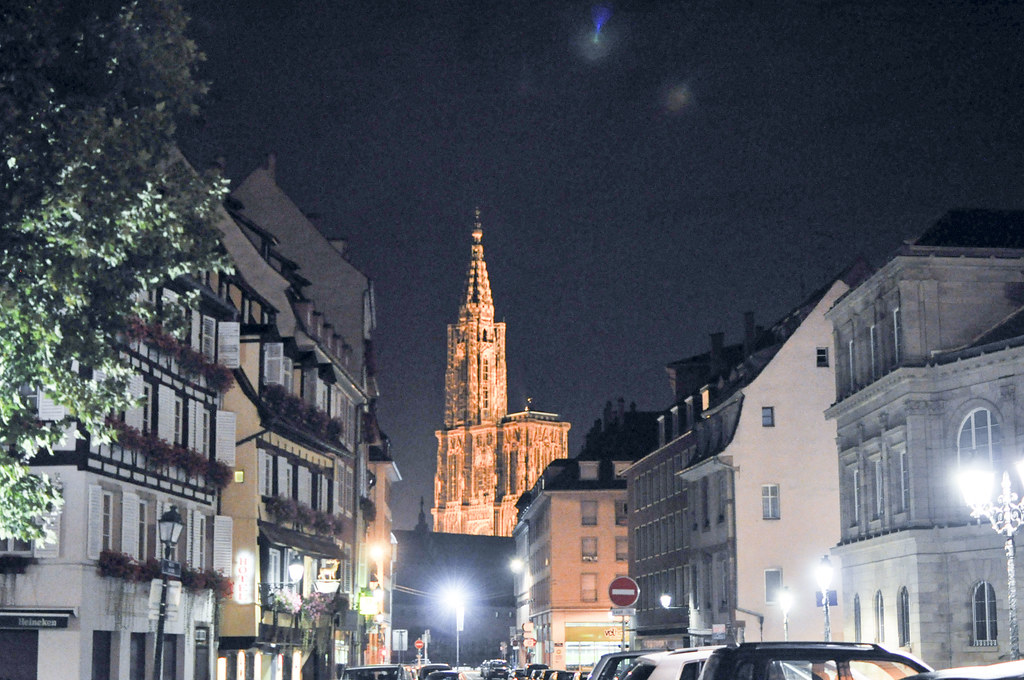 The fact that it’s made of sandstone means that it’s being refurbished all the time. It was quite interesting to learn that whenever statues get damaged, they are taken from the building and stored away safely, after being replaced by new ones. 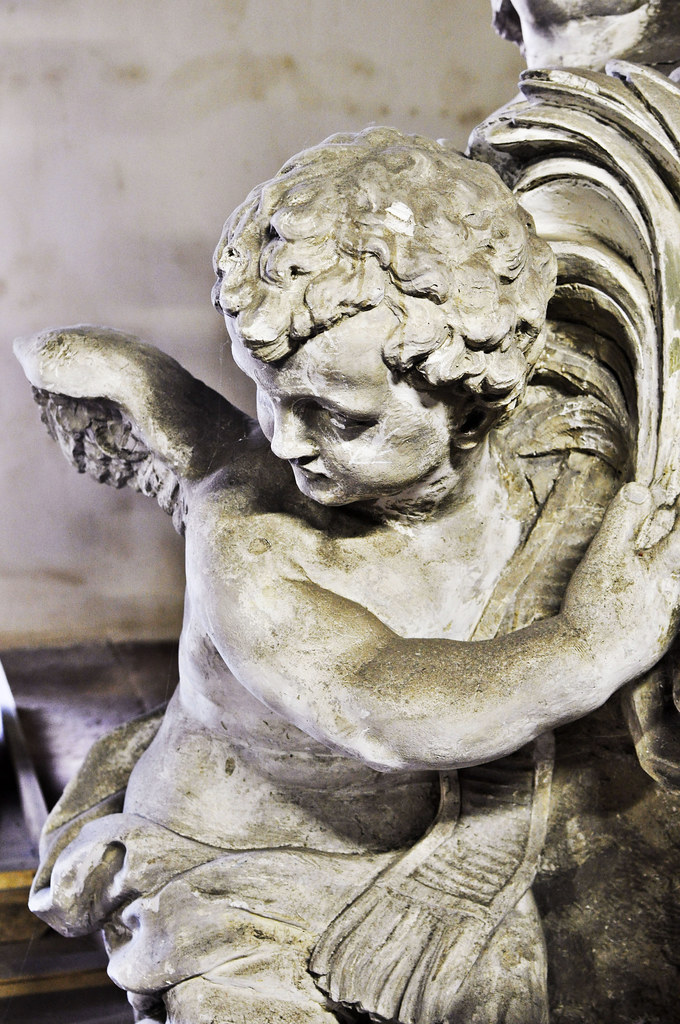 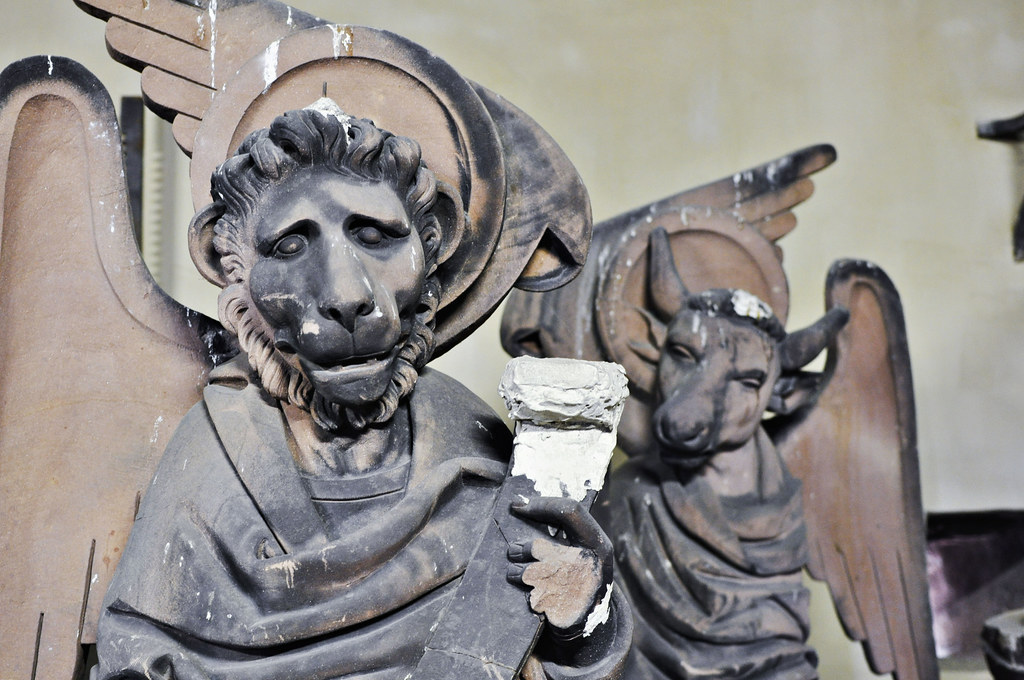 To this day, I’m not quite sure what gave me more chills, the building itself or some of these statues. Isn’t that statue of Mark (Lion) a bit terrifying? 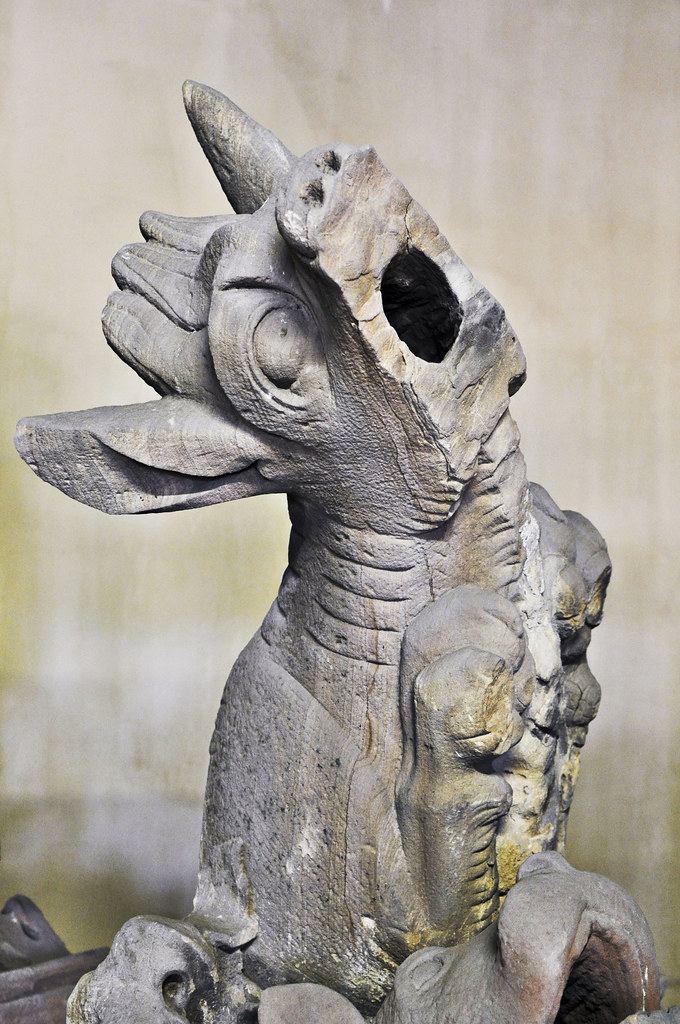 It even has a couple of legends. Jean Marie told us one, it wasn’t quite as I’ve found in Wikipedia, but here goes as he told it.

Either story works for me! When he told us his version, I felt goosebumps all over my skin, and it was definitely not the wind!

I just couldn’t help it. That Cathedral holds some sort of enchantment over me. I keep staring at the photographs, wishing I had taken more. I did take a bunch more, but unfortunately I didn’t notice my camera settings were wrong, and they’re completely burnt.

I want to go back one day, for a longer trip. I feel like Strasbourg has many secrets waiting to be discovered. I want to get lost in its small alleys and wander for hours, talking to the locals and learning its history. 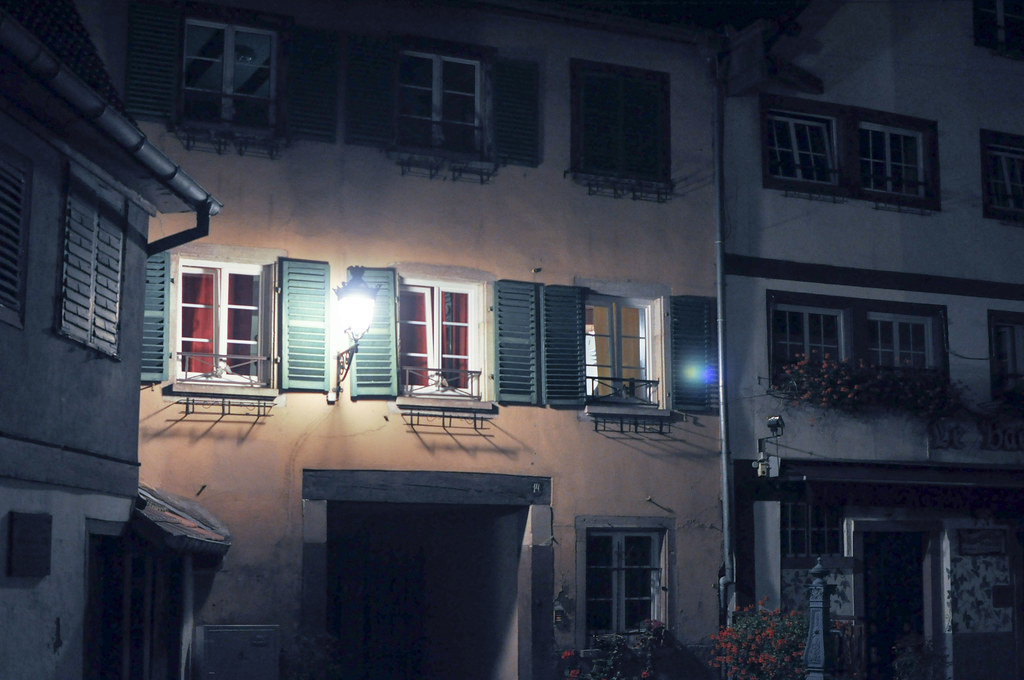 Unfortunately, I can’t show you the entire city here, but if you would like to see some more photos, you can head over to my flickr stream, I hope you enjoy them!